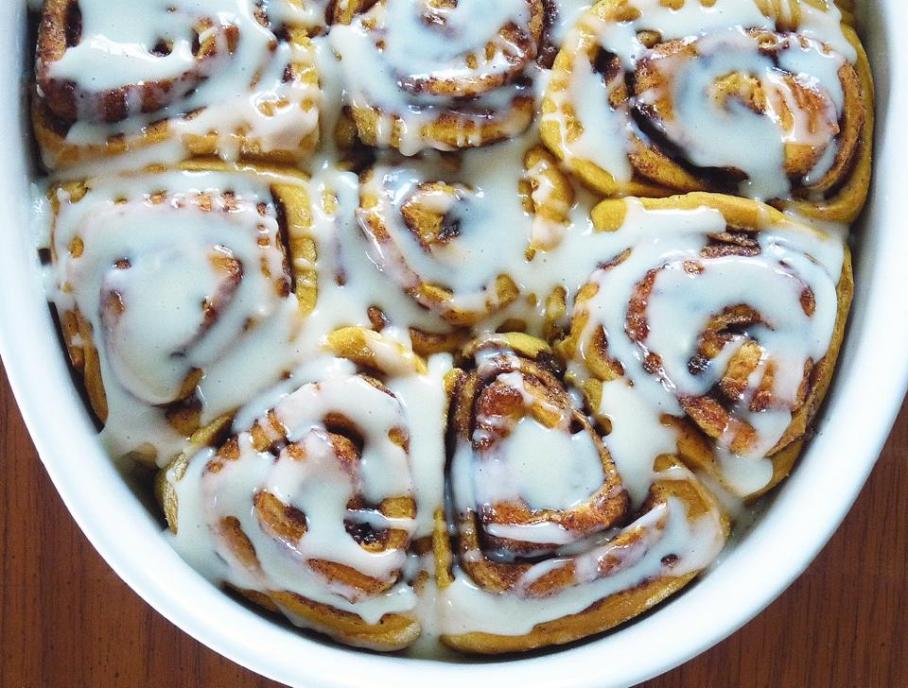 I’ve been looking forward to making these yummy pumpkin cinnamon rolls since discovering the recipe last year on the brilliant and beautiful blog Sweet and Savory by Shinee. Because pumpkin and cinnamon rolls deserve each other, and I’m nothing if not a slightly reckless matchmaker.

I was hoping I could try this recipe after the arrival of my household goods, as the use of a rolling pin makes rolling infinitely (and obviously) easier. But as usual, my sweet tooth and reckless abandon won out as I found myself pulling all the ingredients off our market shelves without hesitation last week. Fast forward to Sunday morning, when I then found myself staring down step 5 with a smidge of doubt and a dash of disappointment. “Roll out on a floured surface into a large rectangle approximately 18 x 15 inches”, you say? Hmmm. Perhaps I should have waited for my rolling pin to arrive after all. But I’m nothing if not resourceful (and a little reckless – did I mention that?), so I scoured my pantry for something – anything – to get my rolls back on track. Can of soup? Too small. Husband’s obnoxiously giant bottle of protein powder? Too unwieldly. Half empty, mostly stale old tube of Pringles? Now we’re talking.

Long story short, you too can make these incredibly delicious cinnamon rolls with a can of Pringles that should have been thrown away two months ago. Or a rolling pin, if that’s your thing. Just make them. Because pumpkin and cinnamon rolls should have gotten together a lonnng time ago. Because it’s still socially acceptable to pimp pumpkin. And because they’re freaking amazing, and you haven’t made cinnamon rolls in a long time (or maybe ever?!). Enjoy in moderation!

*Note: You don’t need a stand mixer to make this recipe. You can easily mix all the ingredients with a wooden spoon and knead the dough by hand for 6-7 minutes, or until the dough becomes smooth and elastic.

Every Halloween for the last few years, I’ve tried my hand at a new doughnut recipe. I’ve struck gold in the past with flavors like Apple Cider and spiced Pumpkin, and had high hopes that these little guys – fashioned after the Girl Scout cookie classic, Samoas (also known as Caramel deLites) – would be just as yummy. Mission accomplished! The combination of sticky caramel, crunchy toasted coconut and semi-sweet chocolate was divine, if not a wee bit messy (which just means ooey-gooey delicious, right?). The recipe below makes 12-15 miniature doughnuts – perfect for a brunch treat or a morning meeting in the office. Enjoy!

Tip: Make sure that you use a slightly thickened (but still drizzly) caramel sauce rather than a caramel syrup. The thickness of the sauce helps the coconut adhere to the doughnut’s surface, preventing the whole thing from falling apart while eating.